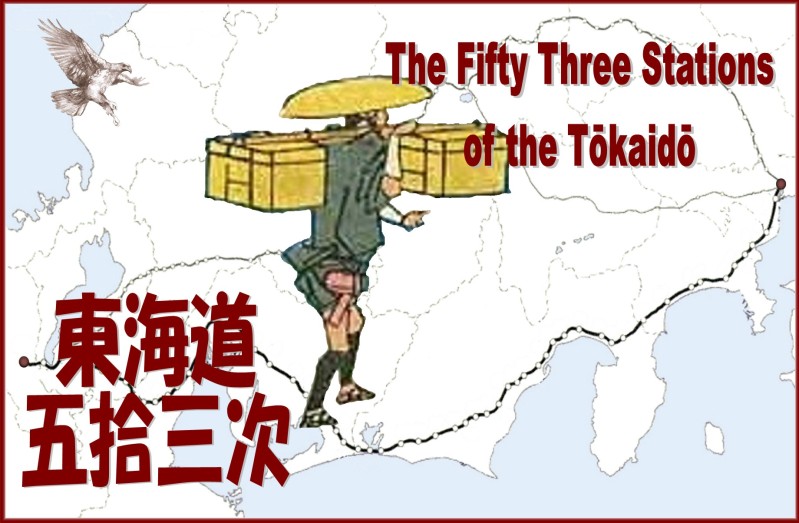 The Tōkaidō (East Sea Road) was one of the five post roads established by the Tokugawa Shogunate. It linked the shogunal capital of Edo (modern Tokyo) with the imperial (and official) capital in Kyoto. It began (as all the post roads did) at Nihonbashi (Japan Bridge) in Edo and ended at Sanjō Ōhashi [Third Tier Great Bridge] in Kyoto. It was first established shortly after Tokugawa Ieyasu was named Shogun in 1603, although the road itself is much older. (I have seen at least portions of the same route represented on maps showing locations even before the Nara Period.) The post road was extended on to Osaka in 1619. The original road to Kyoto contained 53 stations, which were, first of all, post stations for runners carrying messages between the two capitals. Carried in relay, a message could traverse the 484 kilometers between the two capitals in approximately 90 hours. The post stations quickly attracted facilities like inns for all classes of travelers, stables of horses and porters, and other shops catering to the various needs of travelers. Some of them also had inspection gates.

The Tokugawa government was a military dictatorship, in which one diamyō and his house exercised control over the other 300 or so diamyō, who in turn ruled their respective provinces. In order to keep the other diamyō weak and unable to instigate rebellion, the Shogunate required that each daimyō spend one of every two years in attendance in Edo. The expense of maintaining two households and of traveling with a large retinue at least once a year drained the diamyō’s financial resources. It also required that part of each diamyō’s family always be present there, as hostages in fact if not in name. Inspection stations were needed to prevent family members from leaving and weapons from entering the eastern capital. Diamyō were also forced to contribute to various public works and the diamyō whose domains through which post roads passed were responsible for their upkeep and maintenance. As night soil was a valuable commodity, farmers along the route, I’ve read, even maintained well-tended toilets.

Throughout the Edo Period (1600-1868), the merchant class (though officially the lowest social order) prospered, and this increased wealth produced a flowering of their culture. Kabuki theater, sumo, and other temporal delights absorbed the members of this class, and merchant class interest in these things supported a vast audience for wood block prints of these subjects. Travel, especially during the later Edo Period, was also very popular, and publishers of prints and travel guides found a willing audience. Many artist produced travel prints, but the acknowledge masterpiece of this genre is Andō Hiroshige’s Fifty Three Stations of the Tōkaidō. Many other artists, including the great Hokusai, produced prints on this subject, and Hiroshige himself did 15 different series. His first series, the Hoeido Edition produced in 1831-34, is considered his best, and it is a print from this series which is displayed in each station’s placemark, with a link to a site which will display larger versions of this print as well of prints of that area from other editions.

I have also quoted in each placemark the description of that print from Basil Stewart's book, A Guide to Japanese Prints and Their Subject Matter , which was first published by E. P. Dutton and Company, New York, in 1922 under the title Subjects Portrayed in Japanese Colour Prints . It was reprinted as an unabridged edition by Dover Publications of New York in 1979. I would like particularly to thank John Roden for his approval of the use of the public domain material displayed on his comprehensive, accurate, and handsomely displayed site.

For guidance in tracing the route of the road between the two bridges, I relied entirely on the wonderful detailed maps in 東海道五十三次を歩く [Walk the 53 Stations of the Tōkaidō] by 児玉幸多 [Kouta Kodama], published in 5 volumes, Kodansha Sophia Books, Tokyo, 1999. Obviously, Mr. Kodama’s walking route required some departures from the original road, but I was quite surprised by how much of it seem to follow the old path, however much it might be improved with asphalt. Most of the route is already in hi-res. When the lo-res portions emerge, the route maps in those areas will certainly require correction, because it was possible to trace the path of the road only in a general way. If you notice that any of the route paths which have ‘lo-res’ noted in the description have become displayed in hi-res, please send me a PM. And, of course, I would be happy to receive notice of any errors which you may discover.

This post was used in the production of a ten-part
television series on the Tōkaidō. More information
can be obtained HERE.